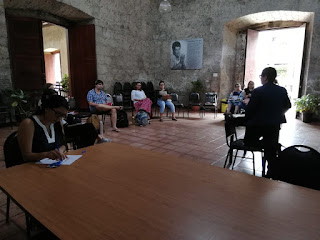 Our river has gifted us many times over for the effort we made to save it.  One of the greatest gift is that it got us started down a path of Service where we have met amazing people.

This past weekend, I attended a gathering where lots of these people were present.  It was wonderful.  People giving much of their “spare” time, their weekends, their resources in an effort to change the status quo of things.

When I think about it, injustice and all the really “bad” things are playing a huge role in our waking up.  I mean, we would not have gotten involved in saving the river if they were going to take just a bit of the water over the next ten years.  They wanted to take all or most of the water and the machines were ready to go.  But when things happen gradually, they are more dangerous because one gets used to them little by little. 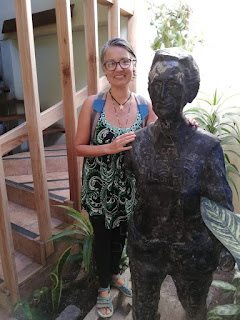 The Ministry of Culture lodged me at Ridgeway House in San Jose, a Quaker hostel that promotes peace and justice, which now houses the statue of whom I consider a dear friend, Peace Pilgrim.  If you do not know much about her life, I recommend you read the compilation of her writings that the Friends of Peace Pilgrim put together in a book after she shed her physical body.

I digress… so the point was that in the afternoons, there was no water at this place. At first I thought a pipe broke and they were repairing it, a common occurrence in our little village.  But then the same thing happened at this beautiful old building where the training was being held.  At Ridgeway House there were large bottles, pots and buckets filled with water.  But at the building where the training wes held, the bathrooms just remained dirty and there was nothing to wash hands with.
Those of us who have water supplied to our houses every day were concerned.  But the city folks just shrugged and said: “oh, yeah, they are rationing the water… there just is not enough for everyone”.
I pass by the pineapple farms often.  Even from the highway, I can see the huge plumes of water shooting out from the pistons in full display and force… and I remember the times we were on that very same highway protesting because a large irrigation project threatened to take our last pristine river away.  This thrusted us into the world of water rights.
I wonder why the Ministry of Environment in Costa Rica allows these pineapple farms to take up so much water, and to pollute the remainder.  I wonder if people's and environmental health truly were the Ministry of Environment’s first priority instead of commodity crops such as pineapple or African palm, or cattle and massive tourism or the highly polluting hydroelectric plants… if there really would not be enough water for the basic needs of the people.

When I returned home and open the faucet and water came out, I was so grateful… and I am grateful to those who made that possible… and I say to those who may be told that there is not enough water for the needs of the people, to question it.  I believe there is a huge imbalance, a huge injustice happening in regards to water distribution and water utilization in Costa Rica… and probably in the entire world, I just can’t speak for the rest.  This can be remedied.  But the first thing to do is get informed.  And the second: Take action.  Let’s not just sit and accept there is no water.


Before we get used to and accept a possibly false premise, let’s question if there really isn’t enough water and where the water is going… If there is less water, question why … get together… there are people who are already working on these questions and you can be of support to them.  Working together we can straighten many injustices. The world needs each and everyone of us.
Posted by Sustainability Demonstration Center at 5:15 AM